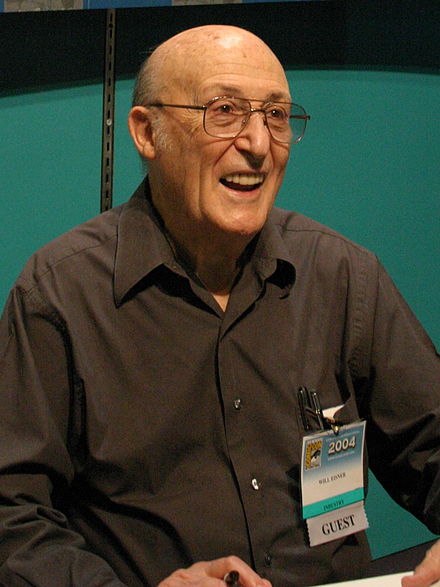 William Erwin Eisner was an American cartoonist, writer and teacher of Austrian descent. Eisner’s father Samuel Eisner was born in Kolomyia, Austria-Hungary. Aspiring to be an artist he painted murals in Vienna. Before the outbreak of the First World War, he moved to New York. Fannie Ingber, Eisner’s mother was born on a ship bound for the United States, to Jewish parents from Romania.

Will Eisner was born in Brooklyn, New York City where he attended DeWitt Clinton High School. He drew for the school newspaper and for the theatre under the influence of J.C.Leyendecker, a designer of magazine cover pages. Young Eisner was a consumer of magazines and films such as those by Man Ray.

To his mother’s disappointment, his father encouraged him by buying him art supplies. In 1930, the situation of the family’s income was so desperate that he was forced to selling newspapers on street corners. He studied one year at the Art Students League of New York under George Brandt Bridgman and got a position as an advertising writer-cartoonist, and he also drew $10-a-page illustrations for pulp magazines.

In his first series “The Spirit” (1940) he experimented with form and content. With the publication in 1978 of his strip book “A Contract with God”, he pioneered with what later would be called a “graphic novel”.

His following graphic novels depict the history of New York’s immigrant communities, such as “The Building”, “ A Life Force” and “To the Heart of the Storm.” The novels were done in two versions – a rough one for the editor Dave Schreiner – the second the finished edition.

In some of his last work, he retells in a sequential form existing novels and myths, such as Moby-Dick. “Sundiata” (2002) is based on historical and part-mythical stories of a West African king “The Lion of Mali”. “Fagin the Jew” is based on Dickens’ character Fagin.

“The Plot” tells the story of the making and refutation of “The Protocols of the Elders of Zion”.

In his later years, Eisner taught at the School of Visual Arts in New York City. Based on these lectures he wrote “Comics and Sequential Art” and “Graphic Storytelling and Visual Narrative”.