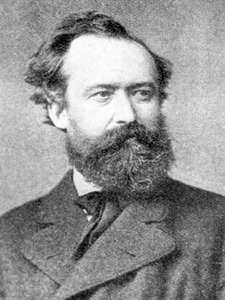 Wilhelm Busch is best known for his drawings, which were accompanied by satiric verse. His Bilderbogen (pictorial broadsheets) can be considered precursors of the comic strip.

But he considered himself in the first place as a painter, with a preference for an impressionist style and a broad and nearly abstract touch.

In 1859, after study at academies in Düsseldorf, Antwerp, and Munich, Busch began to contribute his series of comic sketches to the Fliegende Blätter and the Münchener Bilderbogen, the leading German weeklies.

These were followed by his continuous pictorial narratives with short verse-texts, including Max und Moritz, Die Fromme Helene, Hans Huckebein and Maler Klecksel. By 1910 more than half a million copies of Max und Moritz had been printed in Germany, and his works had been translated into many languages.

Busch’s work continues to be popular, and his writings are widely quoted in German-speaking countries. His style, copied by innumerable artists, was remarkable for its extreme simplicity. With a few rapid scrawls, he conveyed the most complex contortions.

His cartoon style seems to be influenced by the drawings of the romantic painter Moritz von Schwind.