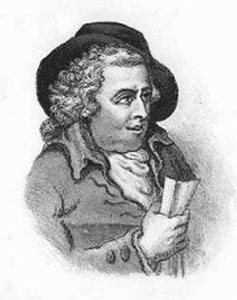 Rowlandson was born in Old Jewry, in the City of London. His father, William, had been a weaver but had moved into trading supplies for the textile industry and after overextending himself was declared bankrupt in 1759.

Rowlandson was educated at the school of Dr Barvis in Soho Square, then “an academy of some celebrity,” where one of his classmates was Richard Burke, son of the politician Edmund Burke. As a schoolboy, Rowlandson “drew humorous characters of his master and many of the scholars before he was ten years old,” covering the margins of his schoolbooks with his artwork.

Rowlandson was sent to Paris at the age of 16 and spent two years studying in a “drawing academy” there. In Pari, he studied drawing “the human figure” and continued developing his youthful skill in caricature. It was on his return to London that he took classes at the Royal Academy, then based at Somerset House.

Rowlandson spent six years studying at the Royal Academy, but about a third of this time was spent again in Paris where he may have studied under Jean-Baptiste Pigalle. On the death of his aunt, he inherited £7,000 with which he plunged into the dissipations of the town and was known to sit at the gaming-table for 36 hours at a stretch.

Discomforts of an Epicure, a self-portrait from 1787, showed that he could aim his caricatures at himself.

Dr Syntax in Search of the Picturesque etc

Rowlandson’s designs were usually done in outline with the reed-pen and delicately washed with colour. They were then etched by the artist on the copper and afterwards aquatinted—usually by a professional engraver, the impressions being finally coloured by hand.

John Bull with Gillray and Cruikshank

His work included a personification of the United Kingdom, by the name of John Bull who was developed from about 1790 in conjunction with other British satirical artists such as Gillray and George Cruikshank.

Rowlandson died at his lodgings after a prolonged illness. He was buried at St Paul’s, Covent Garden on 28 April 1827 aged 72 years.