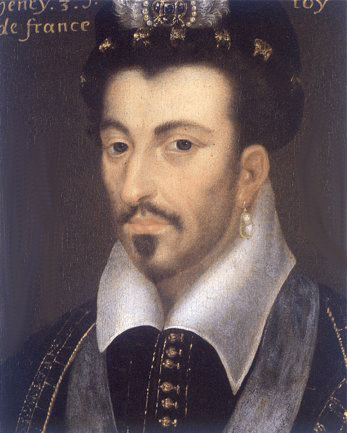 The religious wars in France were mixed with the political struggle between king and nobility and more an aristocratic movement than a popular movement as in Germany. The Protestant Reform in France was started by John Calvin (Jehan Cauvin 1509-1564); his adherents were called Huguenots. During this struggle, pictorial satire became important in the form of illustrations attached to pamphlets and libels and multiplied by the technique of the woodcut.

This war between King Henry III, Henry of Guise and Henry of Navarre/Bourbon was peak as well as the end of the religious/political struggle.

He was the leader of the Holy (Catholic) League, an alliance aiming at restoration of the Catholic religion, with the support of Philips II of Spain. The League was dissolved by Henry III in 1577, but revived by Guise after the death in 1574 of the younger brother of the King, to prevent the Huguenot Henry of Navarre, who in 1572 was married to Marguerite of Valois, to become king.

In 1588 The Holy League was winning and had in Paris many adherents. Here in Paris, a rebellion was unchained during the “Day of the Barricades” against King Henry III. Henri III was day by day losing more of his authority and not seeing a political way out, invited Henry of Guise to his castle at Blois, and under the pretext of reconciliation let him be assassinated together with his brother the Cardinal of Lorraine.

Since the marriage of Henri III had remained childless (he also was gay and was therefore exposed to the most scandalous pamphlets of all parties) became the Huguenot Henri of Navarre, son of Antoine de Bourbon, legal heir. Henri III chose his side and recognized him as successor on condition that Navarre would become Catholic.

Then would be confirmed simultaneously freedom of religion for the Huguenots.  Together they marched on to Paris, but during this march, Henri III was killed by the Dominican friar Jacques Clément. Thus the monarchy was passed in 1589 from the House of Valois to the House of Bourbon. The Catholic party was already weakened because in 1588 the Spanish Armada of Philip II against Elizabeth of England had suffered a miserable defeat.

Henri IV now defeated the League’s army, and his transfer to the Catholic faith took place in 1593 breaking the resistance of Paris (“Paris is worth a mass”), where he entered in 1594 (painted by Rubens).

In his further struggle against Spain, he was assisted by the United Provinces of the Netherlands, England, Savoy and Venice.

Henri IV was thus the first Bourbon and a beloved monarch, with a passion for the common good paired with a cheerful character and human simplicity. In 1610, however, he was assassinated by Ravillac.

By The Edict of Nantes, not only the religious rights and freedom was guaranteed for the French Calvinist (Huguenots) but also their political rights which they had conquered in many cities for instance in La Rochelle and Sancerre.