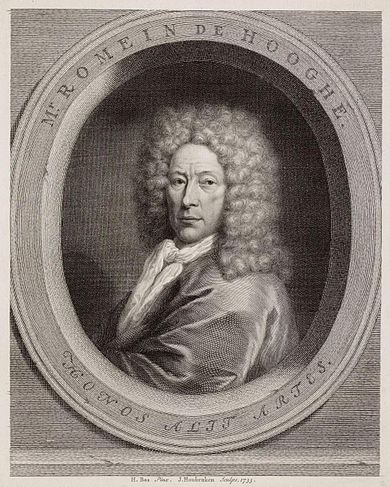 Romeyn de Hooghe was an etcher, a technique that creates a direct result without the intervention of an engraver. He was influenced by Callot in composing large groups of people but missed his light and elegant touch. In his memorial prints, the work of de Hooghe is full of pompous allegories. His cartoons are heavy of erudite content and need much comment.

He became famous in Europe for his prints about the horrors of the French army in the Dutch cities of Bodegraven and Zwammerdam in 1672. He saw the “French Tyranny” as a counterpart to the “Spanish Tyranny” almost a century before. Many new illustrations and occasional prints were made to the orders from princes and other clients on the occasion

of peace treaties, coronations, the issue of books and the like. They resemble each other very much because de Hooghe retouched many plates in order to make them suitable for another occasion and client. The horrors in Zwammerdam are not based on actual observation, but that made them no less effective. Battlefields, meetings and panoramas are designed with great elan and captivating light effects, but many of these works seem like two peas in a pod.

De Hooghe was a fervent follower of the Stadtholder and later King William III, the saviour of his country, and in contrast, critic and satirist of Louis XIV. In his picture “The Anti- of Loevesteyn” from 1673 de Hooghe criticizes afterwards the in his eyes failed politics of Johan de Witt, whom he accuses of conspiracy with Louis XIV.

The 42 numbers in this picture refer to the caption in which such references are explained. Johan de Witt deliberates supposedly with Louis XIV about the best place to attack the Republic. is a reference to the castle where the so-called enemies of the state, such as Hugo Grotius, were held.

De Hooghe used the old trick of the double and reverse prints for his satire on the protagonists of the War against Holland in 1672.

After the Peace of Westphalia, the anti-Dutch propaganda rose to his zenith. The Republic of the United Provinces was seen as an Up Fallen Nation, which had monopolized world trade and wealth. Colbert saw the Dutch trading empire as an artificial phenomenon that could be put right by mercantilism.

Under Charles II the English fleet became again so strong that they could fulfil their threats, and now reached the anti-Dutch propaganda its peak:

– “In general, the Dutch have so schooled in the Bible that almost every cobbler is a Dutch doctor of theology.”

– “There is a bastard sect in Christianity, which quacks, spawns and prospers in their brooding crops.”

– “The Dutch are frogs blinded by the light”.

– “A lout in his drink topped keel is worth as much to them as an officer in full uniform.”

– “Thus, Amsterdam, -turkey- christen- pagan- and jew, a stack of sects and schism great, that bank of conscience where no opinion too crazy was for credit and loan “.

–Freedom of speech and tolerance towards foreigners and immigrants (who by the way had no citizen rights), it was mainly that what absolute monarchs of Europe were repugnant to.

The politics of Johan de Witt were intended to maintain a division between the Stuarts and the Bourbons. He could not know that Charles II and Louis XIV already had agreed together to attack the Netherlands in secret. Furthermore, the treaty kept the incredible commitment in an amount of £ 150,000 in exchange for Charles’s promise to go over to Catholicism (at a non- specified time) and its promotion in England! This treaty was not even known to all British ministers and was only made public in 1682. In 1672 Charles II brought out The Royal Declaration of Indulgence, which was rejected by the Parliament and followed by the Test Act of 1673 with as aim the exclusion of non-protestants to the throne.

When Louis had seen offensive cartoons and images at Van Beuningen, the Dutch ambassador in Paris, he was determined to personally go to war. In full splendour of his majesty, he would attack the despicable Dutch, as Le Brun had shown him as Apollo in armour.

From the south and east, the Netherlands was attacked by King Louis XIV and the armies of the Bishops of Munster and Cologne. William began hastily to bring the army up to strength. In August 1672 followed the murder of Johan and Cornelis de Witt. That the city of Utrecht had to surrender to Louis was according to the ministers a message of God’s wrath for an errant and wicked people.

YEAR OF FORTUNE OF WAR –

In the year 1673, the fortunes of war turned. The army of the Bishop of Munster largely drowned after a dyke burst at Coevorden together with 600 farmers. The ebb which had prevented the French and British fleets to join forces was attributed to the intervention of Yahweh. So both fleets could separately be defeated by Michiel de Ruyter which caused the withdrawal of the British from the war.

MARRIAGE OF WILLIAM AND MARY

In 1677 the Dutch Stadtholder William III married Mary Stuart, daughter of James II who in 1660 was converted to Catholicism.

This marriage did the interest of the Dutch grow for internal affairs in England and vice versa made the Englishmen acquainted with aspects of Dutch culture including the high quality of the graphic arts.

Especially Romeyn de Hooghe who was generously protected and subsidized by William III followed the tragicomic developments closely and made a series of plates in which the French king, his protege James II and the partisans of the latter were covered with ridiculousness.

Although James was by law heir to the throne in 1680 a fierce battle broke out for his recognition between King and Parliament and between Whigs and Tories. All this developed at the beginning favourable to James, and in 1685 he accepted the government.

The opposition, however, increased rapidly when James violated the Test Act of 1673 by appointing Catholics in key positions. A peak was reached when James wanted to force the Anglican clergy to read the Tolerance Edict in favour of Catholics from the pulpit and also a male heir was born.

James’ opponents thought or suggested that the crown prince was a substituted child. In the year 1685 that James II ascended the throne published de Hooghe his satirical prints, wherein no fabrication was shunned.

Queen Mary of Modena, wife of James, is pictured in a conversation with her confessor, the then famous Father Edward Petre, who has taken the form of a wolf in sheep’s clothing. Above the print, the words “Converte ANGLIAM” (Convert England!) and below are the lines: “Is a foolish sheep that makes the wolf her confessor.”

On the next picture we see Father Petre, the Jesuit, and the Prince of Wales, the heir pretended. The child is presented with a treadmillbecause – for one told- he was actually fathered by a miller and had slipped secretly in the bed of the queen,  hidden in a “bassinoire” (a bedpan). This ingenious plot should have been launched by Father Petre. The people named the child (the future Pretender) therefore in satirical songs ever Peterkin or Petertje.

In any case, it was a great disappointment that James’ daughters, both married to Protestant princes, were excluded from the succession. The leaders of the Whigs now invited William III to take over the reign of his father in law. James II flew to France and in 1689 landed in Ireland with French help, but the defeat at Boyne drove him forever back to France.

The Tory opposition in England did not accept William as king, but his wife Mary Stuart as queen. Even after James was expelled by William the Tories remained in a majority on this point, because they did not want to give up the principle of legitimate succession.

As a compromise, the dual-monarchy was established: William and Mary, and on February 13, 1689, accepted the two princes their crown. During William’s absence, Mary acted as regent. By her death in 1695, William III became sole king. He was recognized as such except by Louis XIV.

Meanwhile in Europe foreshadowed a new conflict: the Spanish King Charles II was childless and deathly ill. Louis XIV had acquired at his marriage to Maria Theresa certain claims on the throne. The Spanish War of Succession would be a global conflict since the Spanish empire was at stake. William, however, would not see the outcome of this: he died in 1702 at Hampton Court.

So is called the reign of the Dutch King William and Mary, because she was tied to the “Bill of Rights”, and because King William had expressly waived the prerogatives of his uncle Charles II (except the financial).

For the Whigs as a traditional opposition party, this meant the greatest victory she has ever achieved: strengthening of Parliament by a constitutional monarchy, later by Voltaire in France set as an example.

The domestic policy of the Stadtholder-King was determined by a consistent and energetic implemented policy of tolerance, both in the Republic and in Great Britain. He was (despite his preference for orthodox protestant religion) a protector of Catholics, Baptists and Jews.