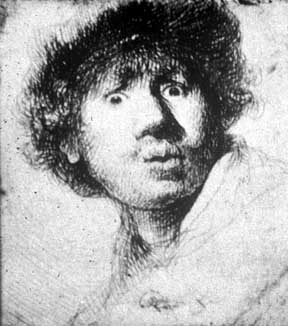 In the northern Netherlands, the education of art was not organized by a State academy as in Italy and France. However, there were painters associations (guilds) and private academies.

Rembrandt entertained a private academy in his house in Amsterdam with many students, actually more than according to the rules of the Guild of Saint Luke was allowed.

He had a lot of success with his in “smooth style” executed portraits. However, following Titian, he went over to a “rougher style” usually combined with chiaroscuro effects. That reinforced the multitude of his followers and lovers of his art because it was perceived as something new, but it also called for more criticism. The fact that students worked in the style of an admired master and completed those works under his name was not uncommon. Many upcoming painters from Leiden and Dordrecht came for some time gain experience in the workshop of Rembrandt, for example, Gerrit Dou, Ferdinand Bol, and Aert van Gelder.

On the drawing, we see a critic (or painter?) with donkey ears through his hat, and with a snake wrapped around his arm (as a symbol of envy) giving his judgment about the paintings submitted to him. These are portraits or half-figures. Left on the ground a woman is listening intently to the oracle, while on the right a young man demonstratively relieves himself, expressing in this way his disdain for the critic or criticism.

Since the text in the picture until now not has been deciphered we do not know whether Rembrandt wanted to make a satire on a special occasion or person or that his satire had a general character. Nor do we even know if the picture is published somewhere or is kept as a curiosity in his portfolio.

To the possible motive of the satire, one can only guess. The picture dates from 1644 and the rejection of Rembrandt’s Claudius Civilis for the new town hall took place much later in 1662. In 1642 the Night Watch was completed, which had given rise to some criticism because Rembrandt had created instead of a group portrait a catchy and dynamic historic painting. Maybe there was some connection with a conflict between the painter and Andries de Graaff, who – also in 1642 – had refused payment for a portrait.