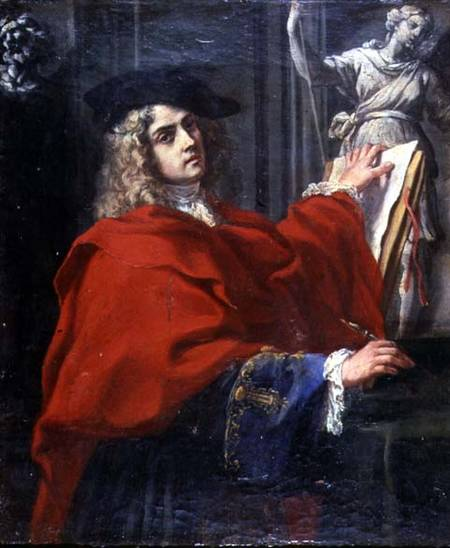 Ghezzi was an Italian Rococo painter and draughtsman born and died in Rome. He is known as an able caricaturist. His pen and gouache caricatures, depicting known individuals in satirical fashion, were much admired and popular.

He made this genre popular in Italy and abroad and also tried to make a living from it by sketching singers, artists and art lovers. He even sold them in the streets of Rome. Apparently, from here many English travellers making a grand tour on the continent brought them home to England.

Ghezzi made also watercolours reproducing stones and marbles in 1727, collected under the name of “Studio di molte pietre” – (Collection of different stones).

Tiepolo was also a follower of Ghezzi regarding comical cartoons and caricatures. Together with the Guardi brothers, Canaletto and others he formed the second generation of Old Masters of the Republic of Venice.

Read more and look for the caricatures and cartoons of Tiepolo in the site “Artist & Caricature”.

The founder and first director of the Royal Academy of Arts Joshua Reynolds started his career with imitating Ghezzi, making drawings in this popular genre but soon stopped feeling that it would damage his career as a society portraitist in Grand Manner Style.

IDEALIZATION OF THE IMPERFECT

Maybe is his artistic concept of what he called “ idealization of the imperfect” a remnant of his period as a caricaturist.

His Grand Manner style originated in the context of history painting as derived from Classical and High Renaissance style. Visual metaphors are added to suggest noble qualities.

Reynolds used the term Grand Manner or Grand Style in the context of history painting. Later the term was transferred to portrait painting with personages in full length in surroundings that conveyed nobility and elite status.