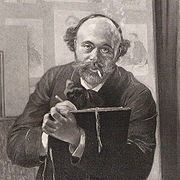 Born in Cour-Cheverny in 1845 as the sixth child of a modest clog maker, Paul Renouard left his native country at 14 to earn a living in Paris. He became a painter in buildings and was lucky to come to work in the premises of the School of Fine Arts.

He shows a drawing talent since he was a child, is very much noticed and in 1868 he is admitted to the School of Fine Arts where he enters the workshop of Isidore Pils. A pupil loved by the latter, he helped him in the interior decorations of the Opera Garnier and in 1875, Pils, having fallen ill, it was Paul Renouard who painted the ceilings of the grand staircase, according to the cartons of his master.

We owe him a number of paintings: dancers, portraits of all the great figures of the century. But that was not his vocation: he was above all a draftsman working in “Black and White”.

His glance, his intelligence of observation and his talent are exceptional. During his lifetime, there was little talent that was as appreciated as his, in the old world and in the new. By the variety of subjects he dealt with, by his quickest notations, he had conquered an innumerable public of the great illustrated newspapers.

He is a well-known collaborator of L’Illustration , Paris Illustré , Revue Illustrée , The Graphic , and is famous for his series on English life, which he has penetrated more intimately than any native, on the Opéra Garnier and on the most important events which interested and fascinated his country and the whole of Europe:  such as the Universal Exhibition of 1900, the Dreyfus, trial  etc etc