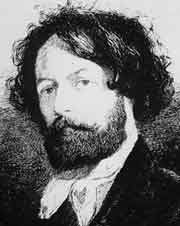 He was born in Paris as Sulpice – Guillaume Chevallier. He was educated as an engineer but choose to follow lithographic lessons with Jean Adams. In 1828 he returned from the Pyrenees and swarfed through Paris without work to gain new impressions. In 1829 he receives commissions from the publisher Susse for making lithographs.

However, the publisher advises him to choose a more melodious pseudonym. That became “Gavarni”, after the “Cirque de Gavarnie”, a cauldron in the Pyrenees.

Since the formation of the political-satirical weekly “La Caricature” by Charles Philippon in 1830, Gavarni has been associated as a contributor, and Daumier will join the “La Caricature” team from 1832 onwards. From 1832 they are also co-workers for “Le Charivari”.

According to his own words – after his wanderings and his return to Paris in 1828 – “he was reborn in the crowd”, he noted: “Everything must be shown after the reality”.

STARTING AS A FASHION DRAFTSMAN

After starting out as a fashion designer and draftsman of the social life of balls and salons, he started from 1830 on to exploit the possibility of lithography for displaying conté and charcoal drawings. But he was not such a great experimenter of lithography as Daumier.

His biographers, the Goncourt brothers, are particularly delighted by the dandy life that Gavarni leads and by the type of woman he created. This recurring type of woman – called “Lorette” – is usually accompanied by a rather silly man.

She possesses charm and spirit and a slim and supple figure and likes to dress in travesty as a Pierrette or in close-fitting pants. The brothers de Goncourt found that Gavarni “deals more with talk and seduction arts than with feeling or passion”.

But this judgment relates to a partial aspect of his work because did not the Goncourts also write that the work of Gavarni can be put on a par with the work of the novelist De Balzac?

This is the collective title that the novelist Honoré de Balzac (1799 – 1850) devised in 1841 for his novels he had written over the past thirteen years. These novels, such as “Le Père Goriot” from 1835 and “Eugénie Grandet” from 1833, are characterized by realistic descriptive art and a profound characterization of the characters.

Many artists such as Gavarni and Daumier have illustrated his novel characters and have been influenced by his work. The title “La Comédie Humaine” also made a school. Gavarni, for example, collected a large number of drawings under the title “Mascarade Humaine”.

A “Physiology” or “Anatomy” is a literary genre of which De Balzac was the initiator. These are short sketches that describe a subject with a certain clinical and distant gaze and that attempt to “screen” the subject with an undertone of ridicule understatement. This genre became incredibly popular and was closely followed by writers and also illustrators who provided “physiologies” with illustrations.

These “physiologies” appeared in magazines like “La Caricature” and “Le Charivari”, and were later released in small yellow booklets with the illustrations. Topics include “The Concierge”, “The poet”, “The musician”, “The wanderer”, “The coiner”, “The crook”, “The schoolboy”, “The social lion”, “The rentier”.

These “physiologies” also occur in Gavarni’s work, but in drawn form, in prints in which vagabonds, poachers, pickpockets, exchange falsifiers, and artistic types pass by.

The great dilemma of the period in which Gavarni and De Balzac lived was the feeling that the Revolution of 1789 had actually remained unfinished, mainly because of its excesses. Many were therefore tired of the wars and conflicts that had arisen from this.

The rapid growth of the general wealth was accompanied by policy without clear principles and a decline in political involvement. The government protected the employers instead of combating the exploitation of the increasing mass of factory workers.

Trade unions were not allowed because they reminded too much of the guilds of the old regime abolished by the Revolution, and in the Restoration, this abolition had not been undone. Strikes and meetings/gatherings were forbidden.

His work does have a political dimension, but Gavarni is not interested in the political caricature that directly targets existing authorities. He is a social satirist rather than a caricaturist because his way of drawing is realistic but without distortions and exaggerations that characterize the caricature style. His view of society is realistic, and as a chronicler of the manners and customs of his time, he is also interested in all aspects of social life, of which of course speaking about politics is a component.

Gavarni leaves for London and works as an illustrator for “The Illustrated London News”. He is deeply impressed by the poverty in the slums and alleys of that city. He makes many lithographs, but also woodcuts and watercolours.