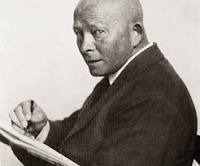 Olaf Gulbransson, born in Christiania, Norway, died in 1958 in Tegernsee, Germany. He studied at the Royal Norwegian Drawing School and worked for several Norwegian newspapers.  In 1902 he moved to Munich and began his long association with Simplicissimus. He became famous for his gently satiric caricatures in a bold style with a minimum number of lines.

After the dismissal of the chief cartoonist Thomas Theodor Heine (of Jewish descent), the magazine Simplicissimus was forced to cooperate with the Nazis and Gulbransson produced during World War II caricatures against the Allies, in particular against Winston Churchill.