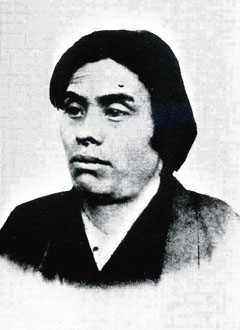 Born into the past

Kiyochika was born into a family of lower military rank serving the ruling Shogunate of the Tokugawa family.

In 1853 a U.S. Naval fleet of black iron ships – unknown before in Japan – anchored off the Japanese coast near Uraga. One year later in 1854, Japan was forced to open its borders for commercial relations with the United States in the Treaty of Kanagawa. This was the end of the old order. From then on things came too fast for the country that had sealed off its borders for 250 years.

Though the youngest of his parents’ nine children, Kiyochika took over as head of the household upon his father’s death in 1862. As a subordinate to an official Kiyochika travelled to Kyoto in 1865, the first shogunal visit to Kyoto in over two centuries. He took part in the Boshin War.

Kiyochika returned to the renamed Tokyo in May 1873 with his mother, who died there that September. He began to concentrate on art and associated with such artists as Shibata Zeshin and Kawanabe Kyōsai, under whom he may have studied painting.

In 1875, he began producing series of ukiyo-e ( “floating world”) prints of the rapidly modernizing and Westernizing Tokyo and is said to have studied Western-style painting under Charles Wirgman.  In August 1876 he produced the first kōsen-ga  (“light-ray pictures”), i.e. ukiyo-e prints employing Western-style naturalistic light and shade, possibly under the influence of the photography of Shimooka Renjō.