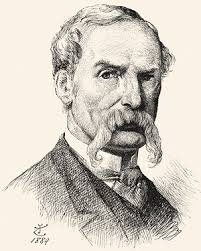 Tenniel was born in Bayswater, West London, to John Baptist Tenniel, a fencing and dancing master of Huguenot descent and Eliza Maria Tenniel.

In 1840, Tenniel, while practising fencing with his father, received a serious eye wound from his father’s foil, which had accidentally lost its protective tip. Over the years, Tenniel gradually lost sight in his right eye; he never told his father of the severity of the wound, as he did not wish to upset his father further

Tenniel’s “grotesqueness” was one of the main reasons why Lewis Carroll wanted Tenniel as his illustrator for the Alice books. The Jabberwock- drawing is grotesque in “optima forma”

One of Tenniel’s fantastic procedés was to use animal heads on recognizable human bodies or vice versa, as Grandville had done with such effect and as the Roman poet Horatius already had earmarked as comic. Another procedé is to be found in deformities such as when Alice drinks a potion and gets larger.

Two relevant sentences bracket sometimes an image, which might better define and dramatise the moment that Tenniel was trying to illustrate.

However, other illustrations work with the texts in that they act as captions, though it is not as frequent as bracketing.

Another way in which the illustrations correspond with the text is by having broader and narrower illustrations.

In 1861, Tenniel was offered John Leech’s position at Punch, as a political cartoonist. The issues of working-class radicalism, labour, war, economy, and other national themes were the targets of Punch, which in turn commanded the nature of Tenniel’s subjects.

Many of Tenniel’s political cartoons expressed strong hostility to Irish Nationalism, with Fenians and Land leagues depicted as monstrous, ape-like brutes, while “Hibernia”—the personification of Ireland—was depicted as a beautiful, helpless young girl threatened by these “monsters” and turning for protection to “her elder sister”, the powerful armoured Britannia. In this, he was – alas – also the echo of the British public.