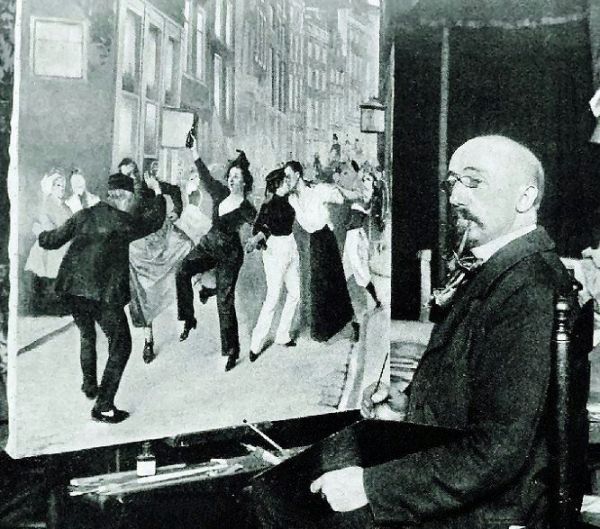 Born in Amsterdam, as the son of Albert Braakensiek, card designer and lithographer. In addition to his job in a fashion store, he attended evening courses and was admitted to the Rijksacademie in Amsterdam in 1876, where he graduated in 1881.

The Plate of the Week

Braakensieks ‘Plate of the Week’, which came out as a separate attachment, gained great popularity, not least because of its accessibility and

comprehensibility. The Plates always attracted a lot of spectators and were hung on the windows of cigar shops. By the way, Braakensiek rarely devised his print himself; the subject was indicated to him by the editors; he made a sketch at the meeting, which he, after approval, drew directly to stone.

His figures, who were often allegorical (such as the Dutch Virgin, John Bull, the Humanity) were skilled but conventionally designed, with a preference for the pathetic gesture. The composition of his prints was (too) traditional and conventional, according to critics.

However, this – by the way scarce – criticism did not express the opinion of the general public, by whom the good-natured, readily comprehensible draftsman remained popular for years – more beloved than larger talents such as Albert Hahn and Louis Raemaekers. Before the First World War, he was the best-known Dutch political draftsman.

In the Netherlands, his illustrations of “The Life of Dik Trom”, in particular, were popular with his work for the feuilletons of Justus van Maurik. He also illustrated “Klikspaan’s”, Student types. He introduced in the Netherlands ” The Adventures of Tom Sawyer”  by Mark Twain.