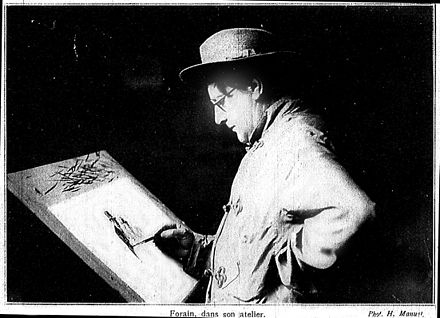 Jean- Louis Forain was born in Reims, and moved to Paris during his childhood where he studied at the École des Beaux-Arts with Jean-Léon Gérôme.

Together with Caran d’Ache, he published for the magazine Psst…! –  which represented the anti-Dreyfus campaign – a stream of anti-semitic cartoons and caricatures.

During the first World War, Forain’s illustrations honoured the patriotism of his contemporaries; and he served in the Camouflage Section under Lucien-Victor Guirand de Scévola.

In his later years, Forain created numerous scenes of the Law Courts and other Parisian institutions plus social satirical drawings on late 19th and early 20th-century French life.