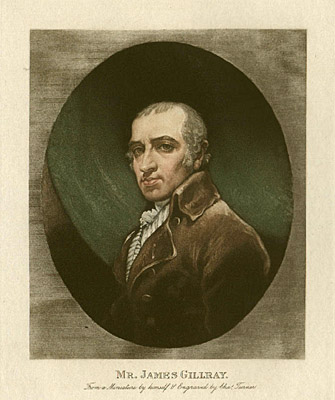 Gillray’s father was a 35-year-old Scotsman who had come to Chelsea after the loss of his right arm in the battle of Fontenoy in 1745. In 1749 he became a member of the Moravian Brotherhood (followers of John Hus) who had been exiled from Moravia and were immigrated to England.

In this Academy, standing under the influential of Comenius, the foundation was laid for his cultural education. He was later a well-informed and literate man who read a lot as evidenced by the depth of his work and his correspondence.

In 1769 he studied with Harry Ashby, a letter engraver who specialized in making bank notes, certificates and checks. According to Gillray, “the first part of his artist’s life could be compared to that of a spider, busy spinning lines”.

HANNAH HUMPHREY AND HER PRINTSHOP

In 1791 Hanna Humphrey became Gillray’s exclusive publisher. She was the sister of his first publisher. This cooperation had favourable effects for both of them. She let Gillray live and work above her printshop and freed him of household problems and interference from publishers.

And she became the first book- and print shop in West-End to where soon the whole society and the political establishment, including the Prince of Wales, came looking and shopping for the original prints. It was also possible to hire a map of prints for one of two evenings. On the etching “Very Slippy Weather” Gillray gave an impression of the shop.

“A Voluptuary under the horrors of Digestion” – 1792

This print shows the Prince of Wales in his apartment in Carlton House amidst empty bottles on the floor. Bills of the butcher, baker and poulterer are visible under the chamber pot. On the wall his device “Ich D” (I serve). In the foreground lies an open cash-book with debts. Miss Amelia Adams, the daughter of the American ambassador introduced the appellation “The Prince of Whales”, describing him as “fat and stuffed” as a result if his style of life.

Gillray and the French revolution

Gillray sympathised at the beginning with the revolution in France, but the terror – starting in 1792 – was also for him unacceptable.

In the following satire, Gillray shows for the first time a less optimistic vision on the revolution. He does two things at the same time namely criticizing Dr Richard Price and making Edmund Burke preposterous, by portraying Price naturalistic and Burke caricaturally.

Dr Price was a non-conformist clergyman and philosopher, who in 1789 preached about the events in France, praising them with the text from the Bible: “My eyes have behold thy Salvation”. Burke smells with his gigantic nose to denounce him on the grounds of his recently published “Reflections on the French Revolution”, in which this revolution is depicted as a destroying of the order of the State.

From 1801 Gillray aims his arrows also on Bonaparte, whose politics he ingeniously coupled with the foreign policy of England, culminating in the famous picture in which Pitt and Bonaparte divide world domination and define the spheres of their respective Nations.

“The Plumb-pudding in danger; -or- State Epicures taking un Petit Souper”- “The great Globe itself, and all which it inherit, is too small to satisfy such insatiable appetites…” – 1805 –

Gillray depicts Napoleon always in the same way: energetic, full of ambition and he also ignores the later corpulence of the emperor. The caricature element lies above all in the reduction to “Little Boney” which Napoleon does look like a more or less deranged dwarf figure.

In the summer of 1803, the spectre of a Napoleonic invasion did lose a wave of patriotic feelings and this did Gillray return to the King in some satires. This one also became famous and is obviously based on the adventures of Gulliver- written by the satirist Jonathan Swift-  which finds himself in the land of the Giants.

The double bottom lies in the fact that “Little Boney” (Bonaparte) takes in the logic of the drawing unnoticed and unintentional Gulliver’s role, i.e of the hero in the satire of Swift.

GILLRAY AND THE TRADE WITH THE EAST

Trade with the East offered according to Pitt the best chance of recovery after the loss of North America and the costly war with France. He, therefore, considered it necessary to prevent the French of intruding in the trade routes to the East, and India.

The lead of England would increase if China would allow a trading post and to this end, a diplomatic and trade mission was sent out, which yielded no results, however. Ultimately, the Chinese would not – until 1860 –  allow an office for communication and trade with the West.

That is the background for the following satire.

The picture represents the receipt of the Diplomatic Mission before the Court of Beijing. Apart from the brilliant performance of the print (in a mixture of etching and stipple technique), the special thing about it is that Gillray anticipated reality in a comical way.

Earl George Macartney embarked for the mission with a letter from George III intended for the then 83-year-old Emperor of China CHIEN LUNG. The purpose of the trip was to establish a permanent English Mission at the Court in Beijing.

For the promotion of trade, Macartney had brought with him many in his eyes attractive items: such as carriages, telescopes, firearms, mechanical toys and the like. But the mission lacked familiarity with the Chinese taste and manners. This however balanced perfectly with the oriental indifference to every stranger and his products of the Chinese.

In June 1793 Macartney was received in Beijing in a “beautiful tent” in which he wore his embroidered vest and arrived in a great state with musicians and bodyguards. The Chinese protocol wrote prostration for, but Macartney could not bring himself to that.

Instead, he chose the middle genuflection on one knee, while all Chinese were deep bowing to the ground. It was exactly the genuflection which Gillray had already drawn in his picture before the mission left England!!

Afterwards,  Macartney wrote in his diary: “So I’ve seen King Solomon in all his glory.” They were treated with the utmost courtesy, but any attempt to raise the purpose of the trip was decisively rejected.

On October 3, 1793, Macartney received the written reply from the Emperor of China to George III:


“You, 0 King, who lives beyond the confines of many seas, nevertheless have cherished the humble desire to participate in the benefits of civilization and sent a mission respectfully carrying your image. The majestic virtue of our dynasty has penetrated to each country under the heavens, and the kings of all Nations have their precious honours on land and at sea offered to us. As your Ambassador was able to determine for themselves, we already have everything. I attach no value to strange or ingenious objects, and see no benefit to the factories of your country “

In September 1794, the mission was back in England. The only difference between satire and reality seems to be in the novelties Gillray had shown: such trivialities as mousetraps, a box of dice, a flute, a magic lantern, together with a miniature of George III, and part of Boydell’s Shakespeare. The balloon appears to come from the mouth of Macartney in the way of the modern comic strip.

GILLRAY AND THE ABOLITION OF THE SLAVE TRADE

In 1775 the American colonies revolted against the mother country and one of the consequences was that no convicted (white) prisoners could be sent there anymore. “A new republic – as was declared by decent people in America- should not be tainted with the “waste” of the motherland.” However, in this, a large element of hypocrisy was hidden as the US economy was already relying heavily on slavery. Even before the commencement of the Revolution arrived each year about 47,000 black slaves from Africa, so that the new Republic in the making, in reality, did not need anymore the labour of white convicted prisoners.

“Philanthropic Consolations, after the loss of the Slave Bill” – 1796-

Before the vote on the abolition of the slave trade, Pitt pleaded powerfully before abolition. As both, the head of government (Pitt) as the opposition leader (Fox) on this issue were in line all depended upon the individual members vote.

Pitt was replied heavily by representatives of the West India Block. They stated that the abolition of the slave trade “a great injustice would mean for the market of the city of Liverpool.” Pitt was urged to change his mind before abolish “a trade which yielded £ 3.600.000.-“.  The proposal was eventually rejected by 74 votes against and 70 for.

The challenging black woman in the print of Gillray – with a headdress after the latest fashion – beaming of self-confidence forms an unforgettable contrast with the timid and apparently “consolation” seeking bishop WILBERFORCE, which – for the time being in vain – had turned himself against the slave trade.

As on the magnification of the print is even more evident her look is vague. Together they smoke tobacco from Virginia.

The ambiguity of the scene is being masterfully displayed but also the personal opinion of the cartoonist in this matter is hidden under thick layers of irony and ambiguity. One of the keys to deciphering this form the prints on the wall and the nature of the male character who has turned his back to the viewer.

Samuel HORSLEY was Bishop of Rochester and also mathematician with dictatorial and dogmatic tendencies. The painting above his head and probably the whole satire is inspired by the pompous and condescending sermon he had delivered “about the virtue and purity of women” in April 1795. In addition, the satire contains a reference (above the door) to a certain Captain Kimber and his trial. He was accused in 1792 of murdering a 15-year-old black girl who had refused to dance for him. However, he was acquitted and two of his subordinates were prosecuted for perjury. “The spirit of Clarence” recalls the fact that the Duke of Clarence had turned himself against the slave trade in the House of Lords.

In 1783 Great Britain was forced to recognize the United States formally. The interests in the slave trade were apparently so great that the abolition still took a long time coming. After the death of Pitt in 1806, Fox was a short time Minister of Foreign Affairs and realized finally the adoption of the bill on abolition.