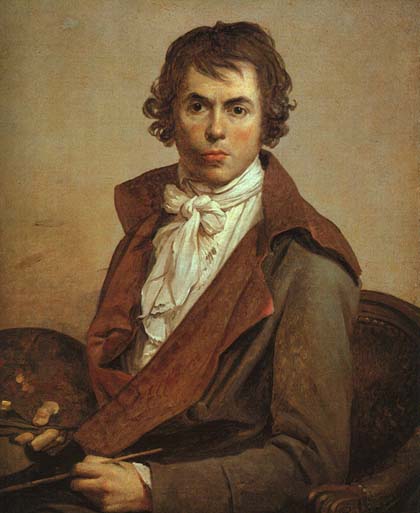 David began as a pupil of Boucher and stayed from 1775 to 1780 in Rome. He began to specialize in heroic scenes based on ancient art. In 1783 he received a state order of Louis XVI for the “Oath of the Horatii”.

He again went to Rome for inspiration. The result was a classic depiction in which the organic motion of the Renaissance is completely abandoned. The virtue of patriotism is expressed with the utmost concentration on the action in an oppressive space in strong colours and deprived of picturesqueness.

DAVID AND THE FRENCH REVOLUTION

At the beginning of the Revolution, he joined the Jacobins and became friends with Marat. He voted for the execution of the King in 1792 and even divorced his wife who remained royalist. He had a studio in the Louvre; the Royal Academy was now open to everyone. He painted monumental scenes at important events of those years.

Jean-Paul Marat was a fanatic journalist with a clear understanding of the forces of the revolution. In his paper “The Friend of the People” he set on to a people’s dictatorship. He fought to the death against the Girondins and had a major part in their downfall. He was stabbed to death by the Girondin Charlotte Corday in 1793.David

Jacques-Louis DAVID and the Caricature

Already in 1790, a member of the Royal Academy was appointed as “censor of caricatures,” under protest from those who considered this genre “as a pulpit of defamation.”  However, the revolutionaries had noticed that “paintings and caricatures have the strongest effects on the feeling of the man”…………

READ and look the elaboration of this part of the post in the site “ARTIST & CARICATURE”.

After the fall of Robespierre in 1794, David was captured as Jacobin and he began to concentrate during his captivity on making portraits, including those of the chemist Lavoisier and his wife, who had lost their lives on the scaffold in 1794. Through the intercession of his students and his wife (whom he remarried), he was rehabilitated.

In this way, he was by Napoleon reinstated and became his official painter in 1804. David saw no contradiction in this since he regarded Napoleon as the executioner and crowning of the revolution.

After the exile of Napoleon in 1816, the French monarchy was restored and David was exiled to Brussels.