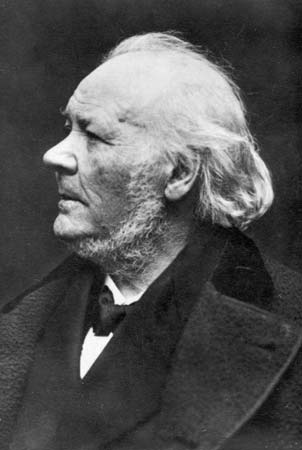 Daumier was born in Marseille and at the age of 13, he began working as a bailiff in Paris, where his family had moved in 1821. His father was a frame maker who also tried to make a name as an author of classic tragedies, an activity that almost starved his family of wife, son and two daughters to death.

In 1822 Daumier started painting lessons with the painter-archaeologist Lenoir. During the revolution, Lenoir had saved as many sculptures from churches and palaces as possible from destruction. As a 14-year-old Daumier made his first litho (a printable drawing on prepared stone). The lithography, invented shortly before by Senefelder, would become Daumier’s speciality.

The political caricature of the magazines “La Caricature” and “Le Charivari” is based upon close collaboration between Philipon as publisher and Daumier as the first collaborator. Both were fiery Republicans.

In 1832, Daumier was convicted of “incitement to hatred and contempt for the royal government”. The reason was the production of the Gargantua print. Especially the corruption of the regime and around the environment of King Louis-Philippe was denounced in this.

The six-month prison sentence would serve Daumier in the prison “Sainte-Pelagie”, where he was called with the nickname “Gargantua”, was not a lost time. He made a self-portrait and was approached by many for making portraits. The use of the litho-stone was forbidden for himself, but others could provide for it.

In this lithograph from 1831 the pear appears already in the middle between the masks, as a symbol of the king. This symbol of the pear had been taken over by almost all cartoonists of the period and in 1834 Philipon had to account for the Court of Appeal as the inventor of this symbol.

In 1831, Louis-Philippe had stated in a speech that “he sought the right course between the excesses of a popular exercise of power and the abuse of royal power”. Philipon – responding to this speech – had promised the readers of “Le Charivari” to publish a gallery with portraits of all “celebrities of the right middle”.

Daumier had chosen to first make “portrait charges” in the form of sculpted figurines of the celebrities, which he would then use as three-dimensional models for lithographs.

This resulted in the 36 mini-sculptures that are now in Musée d’Orsay, 25 of which are the caricature traits of the celebrities and 11 of those of friends (including Philipon) and well-known Republicans.

In 1832 Philipon had set up a stock company for the loyal readers of “La Caricature” and “Le Charivari” to form a fund for paying the fines to which publisher and cartoonists were convicted. The subscribers received monthly a lithographic print on first-class paper as a premium.

The first print had been designed by Grandville and the rest by Daumier. These include “Le Ventre Legislative” and “La Rue Transnonain” from 1834. The last print is a masterpiece by Daumier and lithography in general.

In 1834 the silk weavers in Lyon had revolted and during the bloody oppression, barricades were also erected in Paris. On 15 April, soldiers entered the house no. 2 Rue Transnonain, after shooting out of a window of that house.

Ten innocent civilians including a woman and child were slaughtered. The impact of this print, distributed by the press and newspapers, to the contemporaries was enormous because of the realistic representation of this excessive force of the army. The print shows the facts correctly, while the representation is fictional.

The government did not succeed in seizing the stone on which the lithograph was designed, but seized as many copies in circulation as possible. After the April 1834 uprising, 1500 people were arrested in Lyons and Paris, a small number of whom were on trial.

The end of political caricature

Shortly after a failed attack on the life of the king by Fieschi on July 28 1835, the September laws were introduced whereby the political caricature was forbidden and censorship was introduced for the remaining caricature and social satire.

As a result, the political caricature disappeared from the work of Daumier until 1848 (the start of the Second Republic).

In order to compensate for the loss of income, Daumier initially focused on book illustrations including:

The character Robert Macaire was a creation of the actor Frederic Lemaitre in 1834 and Philipon came up with the idea to further develop this successful comedy together with Daumier as a lithographic sequel series.

Macaire and his comrade Bertrand stand for self-seeking, unscrupulous entrepeneurs, reflecting a business-moral of cheating in all branches of life which was taking governance over France in that time.

The Macaire series exploits also the idea originating from de Balzac of a “re-appearing personage”. Macaire acts in different contexts as an impostor, a charlatan or as a corrupt politician.

The poet and art-critic Baudelaire saw a parallel between the Macaire-series and the series “Histoires Anciennes” (“ Stories from Antiquity”) from 1841,  in which the flavour for ancient mythology is satirized, being according to Baudelaire a paraphrase of the saying “Who will deliver us from the Greek and Romans?”

Daumier as a painter

Daumier is also famous as a painter in a personal free impressionistic style and as a designer of coloured lithographic prints.