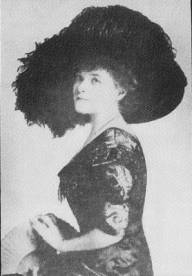 Grace Drayton was one of the first and most successful female cartoonists. Grace Gebbie, her maiden name, was born in Philadelphia in 1877, as the daughter of an art publisher.

In 1900, still in her early twenties, she married Theodore Wiederseim, and created the series ‘Bobby Blake’ and ‘Dolly Drake’ for the Philadelphia Press.

In 1909, as Grace Wiederseim, she published ‘The Terrible Tales of Captain Kiddo’, in collaboration with her sister, Margaret G. Hays.

Grace Drayton was important as the creator of “The Campbell Soup Kids”, round-faced children with rosy cheeks which were a huge success, but Grace’s name never appeared on the drawings.

After she left Campbell, she became well-known for her “Dolly Dingle paper dolls” in the Pictorial Review, from 1916 to 1922.

Grace divorced Drayton in 1923. She started her most famous series, “The Pussycat Princess” in 1935, and died a year later. The comic was continued by Ruth Carroll and Ed Anthony until 1947.