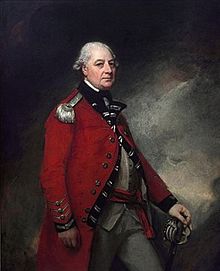 After the sophisticated and professional social satire of William Hogarth (1697-1764) starts in England the period of journalistic satire with an emphasis on current topics from daily politics.

One of the pioneers in this branch was the Brigadier General George Townshend. He had little military experience, though he belonged to a famous family that could boast three centuries of military fame.

However, he had a special talent: he was an amateur- cartoonist. As Brigadier General, he served under the famous General Wolfe (1727-1759), the hero of Louisburg, who because of his prowess and popularity was sent by George II to America to conquer Canada from the French.

Townshend had as aristocrat a personal dislike of Wolfe who came from the middle class and neglected no opportunity of passing to ridicule his commander.

Wolfe, who was not bad-looking, but had a poor figure and a peculiar profile with – for such a strong-willed figure – a little martial chin.

Townshend made in his spare time a watercolour and some caricatures of his commander and hung them in the officers’ mess. Under general laughter one showed them to Wolfe. Wolfe went pale and crumpled the cartoons saying that if we survive “this is a matter for Parliament”.

The next day the battle took place in the Plains of Abraham, and Wolfe was fatally wounded by a sniper’s bullet. Townshend and the other brigadier generals took command and realized the capitulation of Quebec, and later ending the war favourably for England and thus also the end of French rule in America.

Benjamin West (1738- 1820) studied in Rome and became one of the first American (neo)classical history painters. As an American, he felt free from continental- European traditions.  Instead of painting after antique historical models and costumes he preferred painting episodes of recent history in the costumes of the period.

So he painted in 1770 “The death of General Wolfe”, a theme already done by others, but in a heroic and dramatic style and using as an example a traditional composition of the “Lamenting of Christ”, as he has learned in Rome.

West claimed that written history was overtaken by painting, and he declared at the Royal Academy that “the same truth which is described by the pen of the historian is now represented by the brush of the painter.”

In his time this approach was new and became an enormous success with connoisseurs as well as the general public:  the painting was exhibited at the Royal Academy and distributed by means of copper-plates. West produced in advance four copies of this work.

King George III asked advice from Sir Joshua Reynolds (the director of the Royal Academy) about buying the original. But Sir Joshua dissuaded him from the bargain, saying that “realistic history painting” is playing too much on the sensations of the public, and did not fit in the policy of the Royal Academy.  The original went to the relatives of one of the personages in the picture, and George III had to content himself with a copy (which he regretted later).

Samuel Holland – an engineer of Dutch descent – was as aide-de-camp the only person who was present at the death of Wolfe and who had held his hand for some time. He lamented the loss of his protector.

When asked why he doesn’t appear in the painting, he replied that mister West had his reasons for that. In fact, the entire performance – including the  Indian – was put by in a scene. Benjamin West earned a fortune with the painting, but far from a historically faithful portrait, it became a symbol of the globalization of the British Empire.