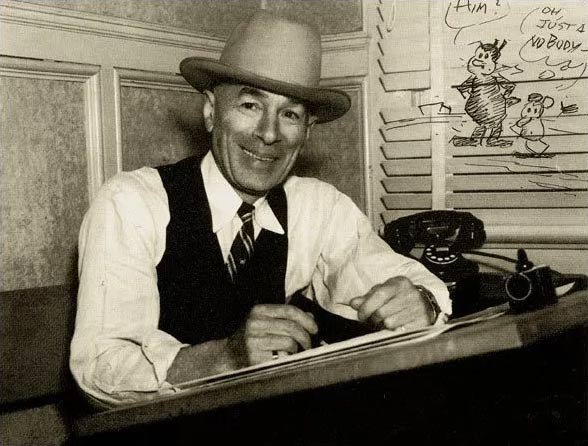 George Joseph Herriman came from a line of French-speaking Louisiana Creole mulattoes who were reportedly active in the early abolitionist movement.

When he was 20, Herriman sneaked aboard a freight train bound for New York City, hoping his chances as an artist would be better there. He was unsuccessful at first and survived by working as a billboard painter at Coney Island, until one of the leading humour magazines of the day, Judge, accepted some of his cartoons.

In 1902, he began his first strip that had a continuing character Musical Mose”. The strip featured an African-American musician who impersonated other ethnicities, only to suffer the consequences when discovered by his audience.

A “Krazy Kat” daily strip began in 1913, and from 1916 the strip also appeared on Sundays. It was noted for its poetic, dialect-heavy dialogue; it’s fantastic, shifting backgrounds; and it’s bold experimental page layouts.

In the strip’s main motif Ignatz Mouse pelted Krazy with bricks, which the naïve, androgynous Kat interpreted as symbols of love.

His artwork made much use of Navajo and Mexican themes and motifs against shifting desert backgrounds and made Coconino County the location of his Krazy Kat strips.

“Krazy Kat’ is also praised for its eccentric yet poetic use of language. His vocabulary was cultivated and quite difficult to comprehend for most readers. He also played with words by spelling them phonetically. For example “li’l ainjil” (“little angel”) and “li’l dahlink” (“little darling”).

Some words were influenced by Herriman’s own local New Orleans dialect. Others reveal inspiration from African-American “slang”, Yiddish, French and Spanish. Puns and wordplay are also prominent.

Newspaper magnate William Randolph Hearst was a proponent of Herriman and gave him a lifetime contract with King Features Syndicate, which guaranteed Herriman a comfortable living and an outlet for his work despite its lack of popularity.

Herriman’s work has been a primary influence on cartoonists such as Will Eisner, Charles M. Schulz, Robert Crumb, Art Spiegelman, Bill Watterson, and Chris Ware.