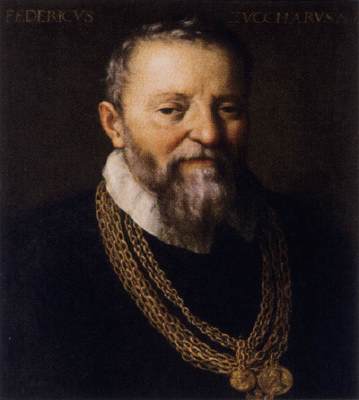 THE ACADEMY OF SAN LUCA

In 1593 Federigo Zuccaro built a house in Rome, decorated it with frescoes, and opened it as a private academy. The name “di San Luca” was a convenient choice because the painters belonged traditionally to the Guild of St. Luke, where they were subordinate to the “paint mixers” with only the status of craftsmen. They tried to emancipate and increase their status by an own Academy. In addition to artists by profession, the Academy was also open to free working artists and art lovers. In the last years of his life, Zuccaro began to think about the theory of art. This resulted in his “L’Idea de Scultori, Pittori e Architetti ” of 1607.

He distinguishes in his IDEA alongside a “disegno naturale” a “disegno artificiale” and from the latter, the “disegno fantastico” forms a part. The imitation of nature is useful and good because the artist learns from it and it helps him technically on. But in the unrestrained fantasy lies the actual inventive force.

“God gave the human species not only the ability to recognize creatures but also to make new ones.”

Zuccaro takes arts more completely, as they mislead the viewer. The deception lies in the fact that people think that the artist mimics nature while he is making in reality constructions of existing and new things. This artistic ingenuity was especially applicable to History Painting and Grotesque Ornaments, but would soon be expanding to other genres. Federigo applied these ideas himself, as shown in the following series of pen drawings.

Federigo and his elder brother Taddeo worked as fresco painters and decorators. In this series of drawings, Federigo depicts how his brother as a 14-year-old boy travelled to Rome to learn the trade from famous artists. He designed in this series “simultaneous images”, i.e events or actions taking place one after the other, as in a story, but shown in one image (and not in different panels as in modern strips).

In the tenth picture of the series is shown how Taddeo in Rome is sketching the facade of the house of a certain Polidori.

Then, in the eleventh drawing is shown, how Taddeo, after a day by roaming the landscape falls asleep exhausted and somewhat feverish.

In his dream he sees the drawn facade of the house of Polidori,  in the drawing indicated by a “dream bubble”;

–  awake from his dream he believes, still overcome by sleep or fever, to find in the arrangement of the stones the configuration of the facade;

– then he decides to pick up some stones to carry them with him in his backpack ;

– and finally, he resumes his journey and walks away.

This entire sequence of conditions and actions is shown in one drawing so that Taddeo is depicted in the drawing four times in total.