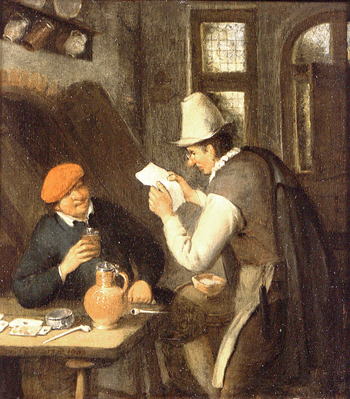 More than Romeyn de Hooghe the name of Cornelis Dusart is to the general public only known as a street name. Yet he has in the history of caricature a great name by his highly expressive (nearly ad nauseam) exaggerated portraits.

Born in Haarlem in 1660 he died there in 1704. He was a pupil of Adriaan van Ostade and follower of Adriaan Brouwer and in the first place painter of tavern scenes and popular and humorous performances. But this same painter made an infamous series of anti-clerical prints induced by the Revocation of the Edict of Nantes.

CATHOLICISM IN THE UNITED PROVINCES

Measured by the state of the Catholic Church in the United Provinces this of hatred pervaded prints seem anachronistic. The Church was at that time officially a mission area in which a small number of priests tried to keep the faith alive.

Catholic public worship and folklore were banned everywhere except in Limburg on the recommendation of the Stadtholder Frederick Hendrick.  In clandestine churches, worship could be exercised only if the magistrates turned a blind eye but was often allowed through bribery.

More important was the spiritual deepening of the faith and the purer dealing with images and other external expressions of faith in the after-Trente period.

REVOCATION OF THE EDICT OF NANTES IN 1685

The motive for the prints of Dusart, however, was the Revocation of the Edict of Nantes in 1685 by Louis XIV, causing Huguenots to lose their freedom of religion and forcing them to convert or emigrate.  By special dragoons, the  Protestants were forced under the threat of violence to renounce their faith.

How strong was at that time the hatred of the Protestant Dutchmen against the power that had oppressed, persecuted and killed their fathers.

It is true that Dusart didn’t attack the simple priests and faithful, but the monks and spiritual advisers of the “most-Christian” king and the bishops who allowed themselves to be bribed by Louis XIV as Guilllaume de Furstenberg.  They are disgusting representatives of malice, cruelty and impudence.