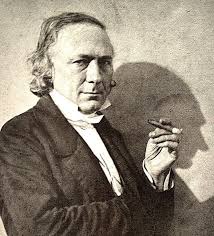 The draftsman-journalist Charles Philipon played a key role in the political struggle between Republicans and Legitimists/ Bonapartists. Already before the July Revolution of 1830, he had participated with his magazine La Silhouette (1829- 1830) in the liberal resistance to the press censorship of the government of Charles X.

During the July Revolution of 1830, the last Bourbon king Charles X was overthrown and Louis-Philippe from the house of Orleans came on the throne. The new citizen-king established himself as accessible monarch and tried to sail a middle course between authority and revolutionary ideas. Among other things, press censorship had been abolished.

Together with his brother-in-law Aubert, Philipon set up a shop for lithographic prints and a publishing house for the satirical weekly “La Caricature” (1830) and the daily “Le Charivari” (1832).

One such newspaper consisted of three pages of text with advertisements and one lithograph per number. For the lithographs to be designed, Philipon succeeded in attracting all known and upcoming artists over the years such as Grandville, Gavarni, Monnier, Raffet and Daumier.

Philipon himself, as the most stimulating but least gifted draftsman, also contributed occasionally a print.

His most famous print was a sketch in which the head of the citizen-king Louis-Philippe gradually turns into a peer. After a detailed version of the sketch was published in “La Caricature”, Philipon was indicted for -majesty as the publication itself was not forbidden due to the cessation of press censorship.

Already in 1832, Philipon had set up a stock company for the loyal readers of “La Caricature” and “Charivari” to form a fund for paying the fines to which publisher and cartoonists were convicted. The judicial intervention had meanwhile resulted in about twenty arrests, six convictions and fines of up to 6000 francs. The participants received monthly a lithography printed on first-class paper as a premium.