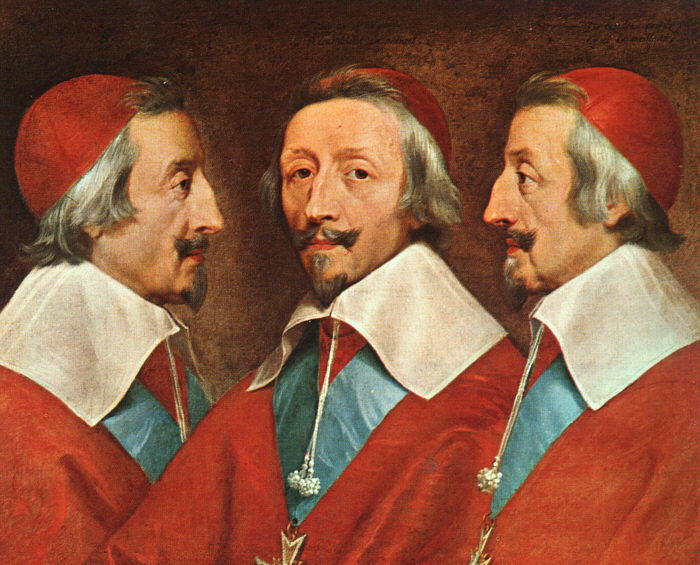 Louis XIII was nine years old when his father, Henry IV was assassinated in 1610. His mother asked Cardinal Richelieu as co-regent. During his reign as prime minister there appeared almost no pamphlets and satires.

This was achieved by the criminalization of insulting the head of state and an active control by the system of Intendants and Spies. Richelieu aimed at centralizing the administration and skill rather than nobility became the basis of a career. Although being a Cardinal of the Roman Catholic Church he concluded alliances with the Reformed powers in his fight against Habsburg, because only the interests of France counted.

Nevertheless, Richelieu had to operate cautiously due to the Catholic criticism about this cooperation with Protestant powers. Before he could interfere in the fight against Habsburg, he was forced to beat down the rebellion and the strongholds of the Huguenots and rebellious nobles.

In 1628 he appealed even to the States-General of the United Provinces of the Netherlands for assistance in the siege of La Rochelle, which despite (protestant) protests was provided.

Since the Edict of Nantes of 1598 the cities on the Re-Island and La Rochelle were strongholds and places of refuge under the administration of the Huguenots. Richelieu stood up against these last remnants of Huguenot power, not for religious reasons, but because they were “a state within the state”.

He let besiege La Rochelle and the Re-Island and forced the Huguenots the Edict of Nimes in 1629.  They had to relinquish all their cities and fortresses and political rights which the Edict of Nantes had let them. Their freedom of religion and freedom to establish their own churches and schools was ensured.