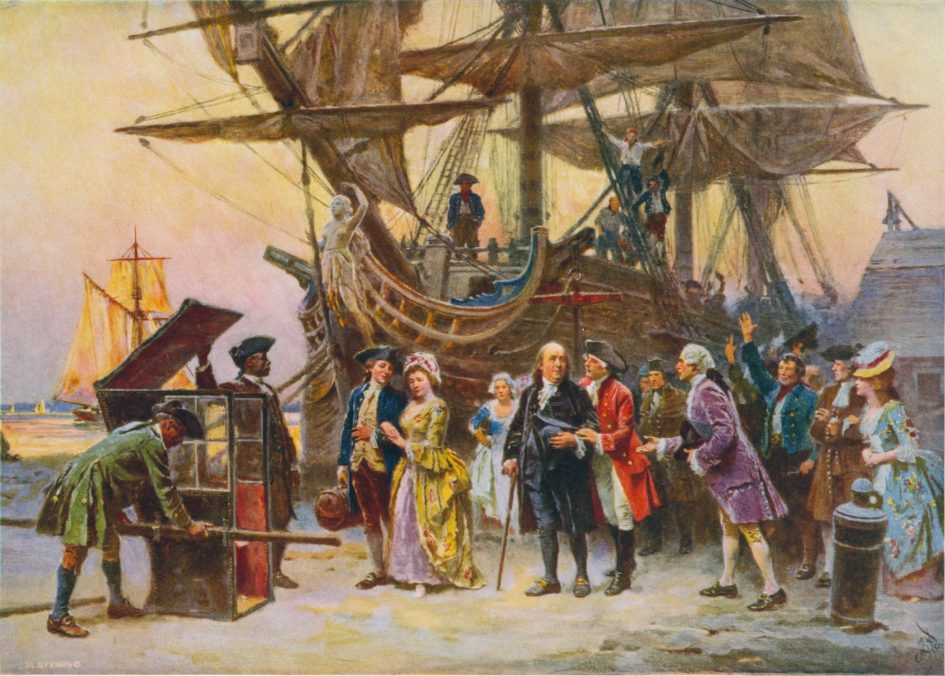 The American Revolution began with the Boston Tea Party in 1774. Civilians dressed as Indians threw in the port of Boston cargo’s of tea overboard because they refused to pay British tax on tea. The British government saw this as a rebellion against the authority of the motherland.

As founding father of that revolution, Franklin played an important role and he became the 6th President of Pennsylvania.  However, he was also an author, printer and amateur cartoonist, and an inventor – among other things – of the lightning rod and bifocals. From 1732-1758 he was publisher and editor of “Poor Richard’s Almanac”.

In this almanack, he published the cartoon “The Colonies Reduced 1774”.

“Brittania directs her eyes to the heaven gliding from the world globe, that is:  she is out of balance. The English oak is a stump with fallen leaves. The shield is lying useless, the lance has perforated New England. Pennsylvania was forced to let fall the laurel-bough. The masts of the British ships bear brooms, that is: they are for sale. The caption says: “Give an alms to Bellisario”.  ( As an allusion to the blinded Roman general Bellisario).

A famous political cartoon by Franklin, published in the Pennsylvania Gazette in 1754. Urging to unite the 13 (here only 9) American colonies and Great Britain against the French and the Indians (Seven Year’s War 1754-1763). Later used as a symbol to unite the colonies against Great Britain in the American Revolution (1765-1783).