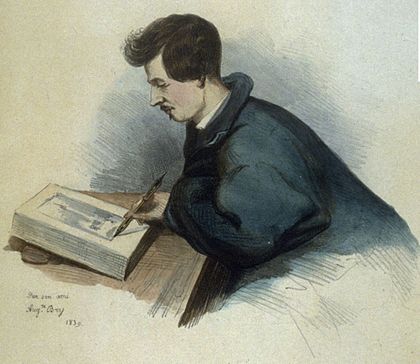 Raffet was born in Paris. He was a student of Nicolas Toussaint Charlet and became an illustrator and a retrospective painter of the Empire.

At the age of 18, he entered the workshop of Cabanel, where he applied his skill to the decoration of , and where he received instruction in lithography. He then entered the École des Beaux-Arts but returned to lithography in 1830.

He was invited by Philipon to take part in the projects of “La Caricature” and “Le Charivari” but was dissatisfied with the radicalism of it and started to specialise in military subjects and in particular in the revival of the Napoleonic legend.

His lithographs of the Napoleonic campaigns, from Egypt to Waterloo, vigorous designs inspired by ardent patriotic enthusiasm, were an immediate .

The list of illustrated works contains the History of the Revolution by Adolphe Thiers and the great Walter Scott by Auguste Defauconpret.

He was present in 1849 at the siege of Rome, which he made the subject of some lithographs, and left a record of it in his “Episodes of the Italian Campaign” of 1859. He died at Genoa in 1860.