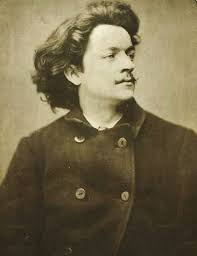 André Gill was born as Louis-Alexandre Gosset de Guînes at Paris as the son of the Comte de Guînes and Sylvie-Adeline Gosset. He adopted the name Gill after his hero James Gillray.  Gill became known for his work for the weekly four-sheet newspaper La Lune.

His speciality was: to draw enlarged heads on dwarfing undersized bodies. Those heads were hand-coloured portraits and considered very accurate not cruel and without deformities.

Many famous contemporaries wished to be drawn by him.

Napoleon III disliked nevertheless the portrait of him drawn by Gill. So La Lune was censored in 1867 and succeeded by the publication of L’Eclipse.

In 1868, Gill faced a lawsuit after drawing a pumpkin that was believed by the magistrates to represent the head of a judge. Gill’s lawsuit brought him fame – as well as a prison sentence. He was, however, released after a short time.

In September 1871, Gill caricatured the statesman Adolphe Thiers who became his favourite target in L’Éclipse, which had resumed publication in June 1871.

In 1881, France changed its censorship laws, allowing that “any newspaper or periodic writing can be published, without preliminary authorization and deposit of guarantee.”

Gill, however, was not able to enjoy this new journalistic freedom. He was forced to enter a psychiatric hospital (Charenton). So he ended his life in a very sad way much like his hero James Gillray.