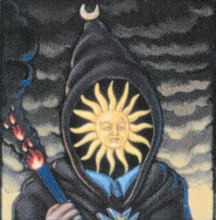 Louis XIV had fallen in love with Marie Mancini one of the nieces of Mazarin but these urged him to marry with Maria Theresa with a prospect on claims to the Spanish throne. In 1660 that marriage took place and in 1661 he began to reign, without appointing a prime minister.

The memory of the Fronde did Louis decide to restrict the power of the nobility by creating a new set of peers from the class of merchants and citizens to work for the government. To accentuate the hierarchic relation between king and nobility he forced the nobility frequently to stay in the newly built palace Versailles.

In the carefully constructed image of the Sun King was, of course, no place for unwelcome pamphlets, satirical paintings and caricatures and the like. To this end, the King took great efforts to find out what was going on in society, in public places, and even in private homes.

Beside the official Intendants, he personally maintained an immense number of spies and reporters. These came from all social milieus, and some did not realize that their reports were put directly in his hands, others did. There were also those who wrote to him directly through channels specified by him, and still others were admitted to the back door of the palace and in his private quarters.

But Louis XIV was powerless against pamphlets and caricatures which came from abroad, including from refugees who had found refuge in Europe.

Republic of the United Netherlands

Especially the Republic of the United Netherlands had become a refuge for the manufacture and distribution of controversial writings in many areas. It was also thé publication centre of propaganda in word and image against Louis and other princes. This was also the source of the resentment which Louis XIV in the course of time began to cherish against the Netherlands and which probably contributed to his decision to start the “War against Holland” in 1672.

Revocation of the Edict of Nantes – 1685

Cardinal Richelieu had in the King’s eyes failed to completely break the power of the Huguenots. But to be sure: Richelieu had prevented a division of France on religious grounds as in the Netherlands with a Catholic south and a Protestant northern part. With one word Louis revoked the Edict of Nantes which protected the Huguenots since Henri IV and placed the Protestants and their faith outside the law.

Through special dragoons, he tried to force conversions. He acted like a Roman emperor persecuting Christians, except that both persecutors and persecuted were Christians. The persecution of the Huguenots began with the removal of their schools and the destruction of their churches. The steadfast in their faith waited for prison or galleys. The result was an exodus across Europe to an estimated amount of 300 000 French citizens taking with them their wealth and skills.

It was probably the absolutist notion of a Gallican church for all French that drove him to this coercion of conscience. He fought also against extreme forms of Catholicism, such as the Jansenism of Port-Royal.