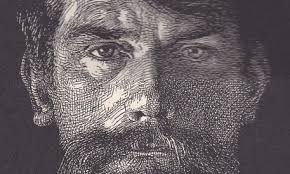 Albert Hahn was a Dutch political cartoonist, poster artist and book cover designer. He was born in Groningen where his father painted signs and glass and made frames.

At the age of nine, he developed tuberculosis in his vertebrae and could not finish school. A few years later, he enrolled at the “Academie Minerva” in Groningen. His training there was interrupted by a recurrence of his disease, which forced him to spend two years in a hospital. At seventeen, he returned to the Academie.

Hahn designed the captions of his cartoons by himself. His style was influenced by Thomas Theodor Heine the caricaturist of the German “Simpliciissimus “.

From 1896 he studied at the “Teekenschool Kunstambachten” in Amsterdam and, after graduating, became a drawing teacher at a technical school.

One of his first projects involved a study of the bad housing situation in Amsterdam. The result was a booklet called “Krotten en ” (Shacks and Slums), published in 1901, with his drawings.

He was able to quit his teaching job in 1905 after getting a permanent contract with a newspaper “Het Volk” (The People), and the periodical “De Notenkraker” (The Nutcracker).

His political cartoons and his anti-war drawings are of the utmost expressivity.

In 1918, just before the end of the war, he succumbed to his disease.