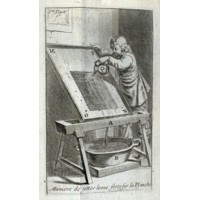 He was a student of Jacques Callot, and in his art is mixed with testimony, probably as an influence of the Protestant tradition to which he belonged.

In addition to religious scenes, he also presented the reality of the bourgeois life of his time through his engravings of fashion, institutions, crafts and professions.

He designed the cover page of the “Leviathan” in which the English philosopher Thomas Hobbes described the political philosophy of absolutism. The absolute monarch uses a sword and the episcopal crook as symbols of the worldly and spiritual power that is united in him. The body of the monarch is composed of the bodies of his subjects who, according to absolutism, are to form an “organic whole” with him.

He also made some caricatures on soldier life such as “Le Capitaine Fracasse”, and a satirical portrait of Louis XIII as “Hercules”.